Tags: Argiope, spiderlings
I'm guessing that that these gorgeous little spiderlings--clustered in the nursery their mother set up in the slot in one of our backyard chairs--are the grandchildren of one of the Argiope babies featured in the very first Spider Silk blog post, posted nearly two years ago. Exactly which one is anyone's guess. Which says something about natural selection. 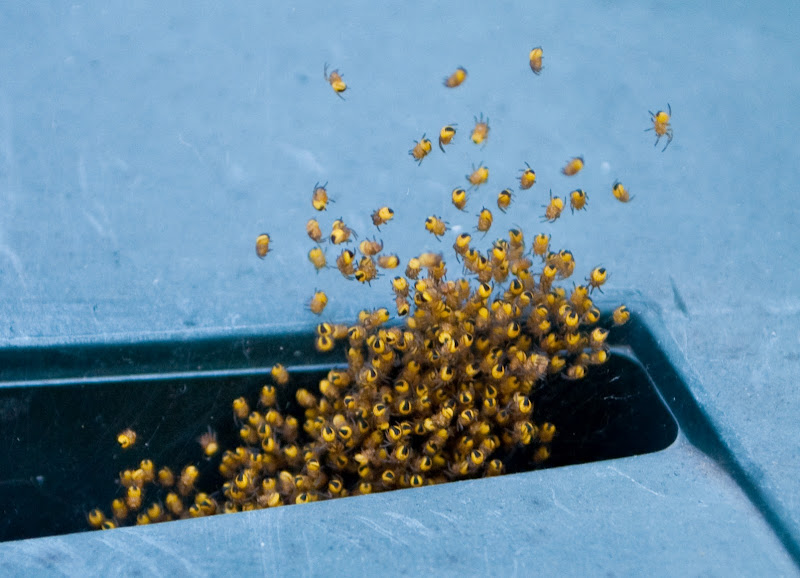 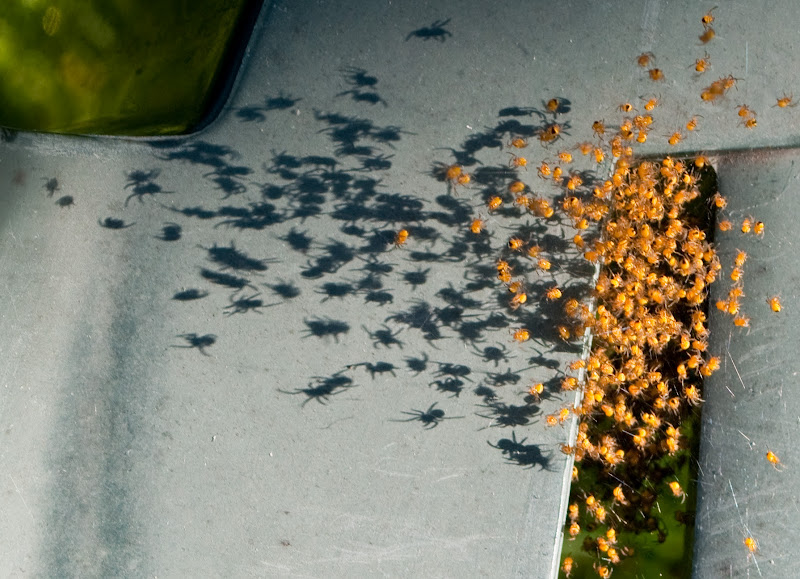 I love their shadows in this one.

Absolutely adorable. And one or two will one day be stunning adults. Pity it won't be all of them! Thanks for the stunning photos.

Wow, you ought to submit these amazing images to National Geographic! Or a genealogy magazine.

Remarkable photos... especially the shadows in the second one.

Tags: Argiope, silk
Here are links to two interesting blog posts about spiders likely to be encountered in many parts of the US at this time of year:

Bill Hilton, Jr., writes about a variety of spiders and their webs at This Week at Hilton Pond in a post titled "Spiders of August: The Case for Arachnophilia."

Tags: spiderlings, Argiope
It's always best to start on a bright note. And it's hard to get much brighter than a new batch of spiderlings.

I went around the back to take the trash out two weeks ago and caught sight of this web. At first, I thought it was plastered with struggling fruit flies (I've had to start wearing glasses this year). Closer inspection revealed these awfully pretty youngsters, scrambling busily past each other, each laying down line after line of silk. I'm almost certain they're Argiope aurantia, commonly known as black and yellow garden spiders.

They're gone now. But there is a small orb web in the same location, containing two silk zigzags reaching away from each other on opposite sides of the web's hub. As we discuss in Spider Silk, these zigzags have led to argiopes being known in some locales as writing spiders. So it seems likely at least one of these little beauties has decided to stick around.
Read More
2 Comments

You are unique and so is your mind. No one else takes me to this kind of web!